First, I have some really cool t-shirt collections available for sale, some my designs, most not.  There are unisex tank tops, crew neck and v-neck shirts for ladies, basic t-shirt for men, long-sleeve shirts, and mugs.

I have three collections at the moment:

More available to check out by clicking the above links.  I'm just getting this together, so there will be more to come.  There are some really cool designs.  Do check them out and let me know what you think!  As soon as I can put up a better display, I'll do so, but as of yet am not seeing how, unless you simply click on the link to see the entire collection.

Here is a video of our recent HyperCarnivore shopping haul, plus a look at a few meals we made from our shopping haul the previous week.  That video is linked at the end of the one below.

The last time I had a T-Bone steak was when I was a kid.   It was the rare time that silence would fill the kitchen, other than the sounds of all of us gnawing on the bones.  Beef was very affordable when I was growing up.  Chicken was more expensive.  People enjoyed eating beef.  It's what was for dinner.

A client of ours shared a story with me today.  He is in the medical profession, as is his wife. They help clients with several lifestyle changes to help them overcome many health issues.  It's part diet, part grounding, part getting the early sun exposure in the retina of the eyes, and part changing how one uses technology.

He has read research, and been privy to the expert opinions of many neurologists for decades now, and claims there is quite a consensus about just how much of an impact cell phones, and especially the new 5G wireless access is having on our health ~ especially the younger generation who practically came out of the womb with a cell phone.  5G is already in New York and a few other places.

During his many years of travel, he would always question passengers he sat next to.  One time, an elderly lady next to him was reading without any glasses.  He was impressed, as he himself needed reading glasses and was then in his 40s.  He asked her age.  90.  She was 90, and did not need reading glasses, nor did she have contacts.  He asked what she ate.  She grew up on a farm, and consumed bacon, eggs, butter, and meat, with some fresh salads, and fish.

As years passed, he found a consensus of those who were aging well, still retaining their full faculties and sensory abilities.  What the majority  had in common was that they all grew up on farms, and raised most of their own food.  They ate meat, eggs, and butter with some plants.

Our 4# plus package of ground beef has netted us two evenings of burgers, with enough for another day of meals.

On Sunday, we had burgers with a little bacon.  I pour the bacon fat onto the burger once cooked.  They were cooked in a stove top cast iron skillet, so the fat falls to the bottom.  Not wanting to waste that, I add some to our burgers, then save the rest in a jar. 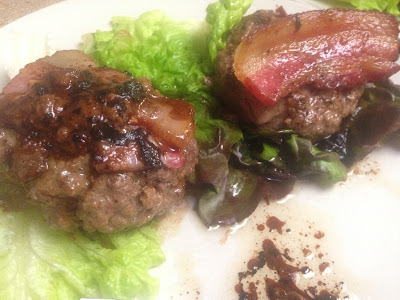 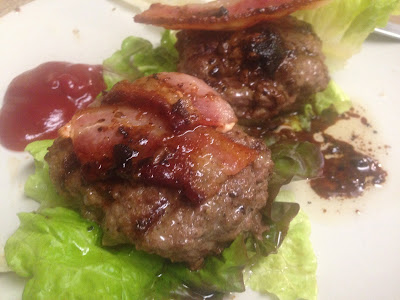 We have come to realize that eating a low-carb, high protein and fat, hypercarnivore or keto diet works the best when consuming fattier cuts of meats.  Most people who have been following a low-carb, ketogenic or carnivore diet seem to recommend the same.  You can enjoy lean cuts of meat, but need to make sure to add enough fat ~ especially animal fats.

I like lean chicken breast, or sirloin steaks, but the satiety factor, and ability to eat the right amounts of protein and fat works the best when getting close to a gram for gram match of each.  One gram of fat per one gram of protein, which should net a 70% fat, 30% protein percentage of total calories, or thereabouts.

I know we have all been beaten over the heads for decades now about how bad saturated fat and red meat are for health, but it's simply not true!

It still seems crazy to me that I can almost exclusively consume animal flesh and fat and feel so much better than when I was consuming those 'good for you' whole plant foods.  I have much greater focus, calm and steady energy, a happy upbeat mood, improved digestion, elimination of the lower belly bloating, and better skin and hair  than when I was consuming all those high fiber plant foods.

I also realize that the only reason it seems crazy is because of the context from which we have grown ~ with a mass campaign to educate all of us to "eat our fruits and vegetables" found absolutely everywhere these days!  If we had been taught to eat the nutrient-dense animal foods all along, like we once were, it would not seem crazy.

Indigenous populations from around the world consumed varying degrees of plant foods, but celebrated the animal foods ~ whether of land or sea ~ considering them more sacred.  Those populations that consumed greater amounts of animal foods had better overall health, better dental health, and better immunity from disease.


We had burgers wrapped in red leaf lettuce with a little basil the next night. 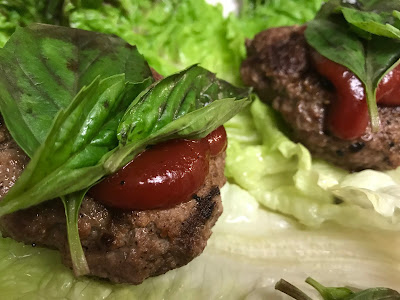 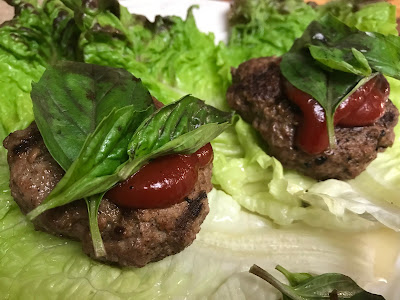 On Sunday, we did make a quick trip up to Trader Joe's, which wasn't shown on the above shopping haul video.  It was a last minute plan.  We bought more butter to make our own ghee, which Don prepares very simply in the oven on a low heat.

While at Trader Joe's we snagged a pack of their name-branded bratwursts to bring home and grill on the cast iron grill pan for breakfast.  The ingredients list: pork, beer, and a small percentage of spices, salt, and sugar.

They are really good!  We had a full on Brats and Burgers day on Sunday!

Having the added fat helped us to both feel pretty upbeat all day.  Prior on some days, our protein intake was pretty high relative to our fat intake.  This caused a change to Don's stools.  They were watery.  Consuming adequate amounts of fatty meats, or added animal fats (not just olive oil or coconut oil) is important when eating a hypercarnivore, or low-carb, high-protein and fat/ketogenic diet.

Try it and see for yourself!  In the long run, studies have indicated that those with high cholesterol have a lower all cause mortality rate.  Our body is made up of fat.  Cholesterol is an important component of our brain and nerve health, sex hormone production, and much more.  Some further reading suggestions are linked at the end of the post. 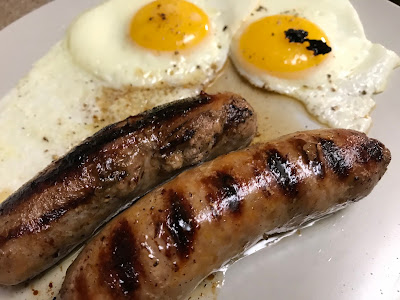 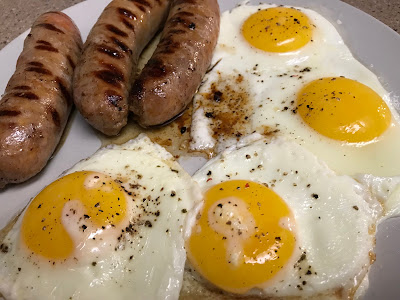 We actually picked up a 2 pound pack of the fat trimmings from our local butcher, who kindly gives it to us at no charge.  This can be rendered into beef tallow.  Or, fried and eaten.  We had fat with the last remaining T-Bone for breakfast on Monday, along with eggs.

We were still finishing our strength training and calisthenics workout when I began to prepare breakfast.  We were running pretty short on time.  However, note to self:  Don't cook eggs while doing something else!  I over cooked my poached eggs.  Bummer! 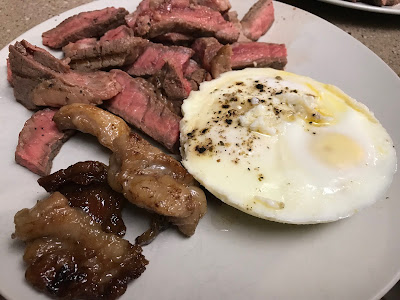 The more I eat mostly beef, and enough fat, the better I feel.  It certainly doesn't seem to be turning into fat on my body! 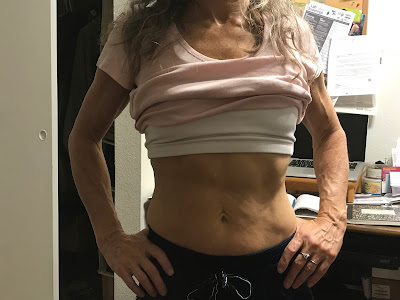 A closer look at our T-Bone steaks.  Grilled to perfection.  I put some Kerrygold butter on mine!  Don added some beef tallow to his. 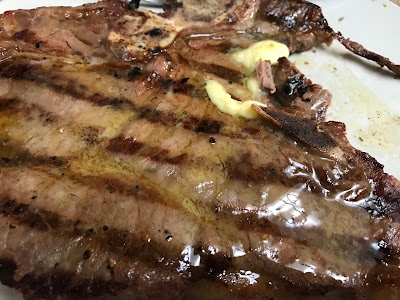 I put a roasting pan in the bottom of the fridge for all our fresh or thawing meats.  The whole chicken (in the bag) has been in a big soup pot since this morning for bone broth.  Bacon, eggs, the steaks buried on the bottom with the ground beef, and a chuck roast on the higher shelf thawing.  It's actually on top of some chicken breasts we had purchased a few weeks back, also thawing.  (I'll post how I just prepared those chicken breasts in the next post.)

The jar in the back is the juice from the fermented red cabbage and beets from a while back.  It may still have some veggies in it, but haven't looked in a while!

The basket on the bottom that is covered has some local grapefruits given to us by a client. 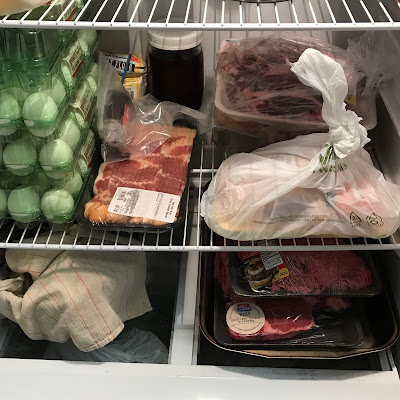 I turned Don onto the high-fat blended coffee pre-training this morning.


50g of butter (half is salted Kerrygold, half is unsalted), 2 Tbsp. coconut oil, a splash of hot water, and coffee.  I blend the butter in the hot water first if it had not had a chance to soften.  Then I add the coffee and coconut oil and blend for 20-30 seconds for the nice froth.  Really good.  You could use ghee instead, which is clarified butter with the protein solids removed. 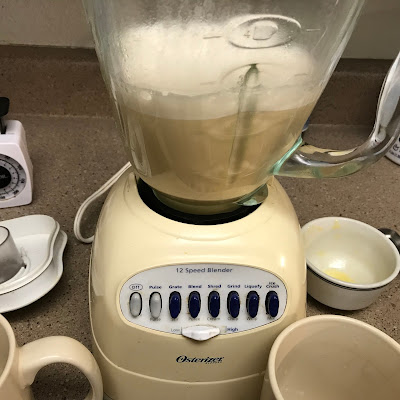 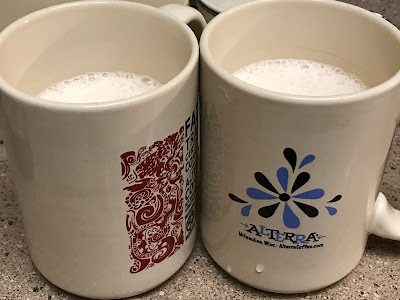 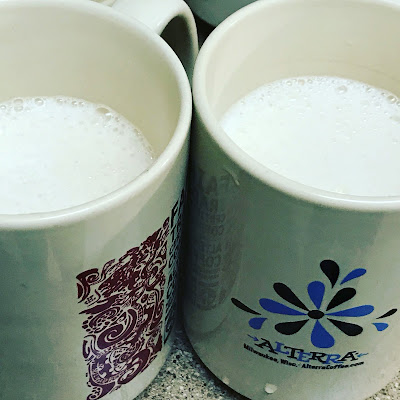 Well, that is a look at the first two days of meals post our trip to the market.  We may be returning to Albertson's tomorrow (by Tuesday) to get another pack of the ground beef before the special ends!

Read more about cholesterol in The Cholesterol Myth.


Here are a few articles/studies about cholesterol as well for those wanting to read more:


The U.S. Government is poised to withdraw longstanding warnings about cholesterol ~ The Washington Post
'Bad' cholesterol not as bad as people think, study shows ~ ScienceDaily
Total Cholesterol, Severity of Stroke, and All Cause Mortality | Stroke
Study says there is no link between cholesterol and heart disease ~ NHS.UK
Cholesterol and all-cause mortality in elderly people from the Honolulu Heart Program: a cohort study, Science Direct
People with high cholesterol live the longest ~ Uffe Ravnskov