I have avoided dairy foods off and on throughout my life, believing dairy to cause phlegm, sinusitis, allergies, and acne, along with constipation.

Interestingly, for myself, these symptoms never abated while avoiding dairy.  In fact, most recently when eating a whole-foods, plant-based diet, and having avoided all dairy foods for over five consecutive years, these and other symptoms worsened.  YET, I still held this belief in my mind that dairy was a problem! 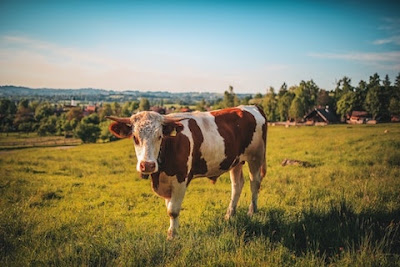 This is how our minds can trap us and go against us rather than be our ally!

Don and I had decided to experiment since switching to our hypercarnivore diet.  We were eating dairy foods at first, later deciding to see what changes we would experience from eliminating them.  We continued to have some butter, heavy cream, and occasional half and half, so it wasn't totally dairy-free other than roughly week-long stretches without any here and there.  We were curious to see if eliminating, and now adding them back would impact his decades long issue with psoriasis.

Initial progress eliminating the bulk of plant foods was very hopeful.   However, Don's psoriasis seemed to actually improve more when consuming dairy, versus when minimizing or eliminating it.


We began to include our primary dairy staple, homemade yogurt again.  Don also drinks milk.  I do as well, but less so, and I heat it first.  We are consuming commercial grade dairy products. 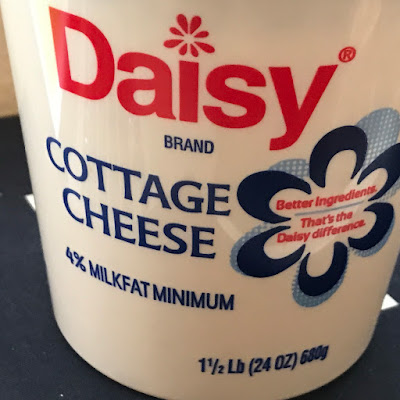 My father loved steaks.  Whenever we went out to dinner as a family, it was often to get a steak.  We would go to the classic, now closed Berghoff in Chicago, or Biasetti's Steak House.  We used to also go to the Sizzler, where you could get a great steak and salad bar.  Also now closed.  Sometimes he would get the coals out, and light up the old-fashioned, charcoal barbecue.  Although my dad was a 'numbers' man, he seemed to enjoy 'manning' the barbecue.  We had a nice big back yard, where my sister and I could play while the dogs, burgers, or steaks sizzled away.  I would guess that my mother was quite content to have a break from cooking over a hot stove during the peak summer heat.  And, she never seemed to balk at not being the one to do the grilling. 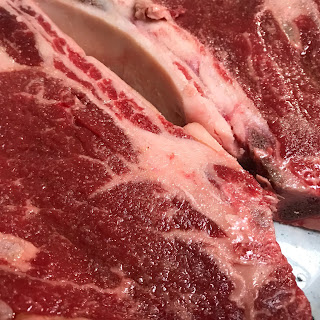 Google 'grilling is sexist' and you will find a slew of articles, such as this: 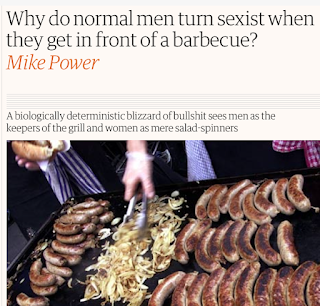 According to the author of the above article,

No, what really drains the joy from the summer breeze is the assumption, and the practice, that this is Man's Work.  All over the UK, probably the world, the barbecue is now one of the last places where even normal blokes become sexist.  What we have here is some kind of psychic counterpart to the Paleo diet, a biologically deterministic blizzard of bullshit that sees women as salad-spinners and men as the keepers of the grill, the tenders of the flame, lords and masters of thereat.  It's a sausage-fest out there, and it's getting ugly.

Okay, okay, I didn't GRILL them outside on a GRILL.  But I did cook these uncured, sugar-free kielbasa inside, does that count?  Personally, the only thing that drains the joy from the summer breeze around here is, well, when there is no breeze, and it's just plain HOT! 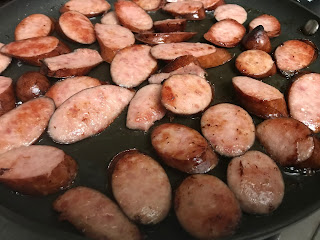 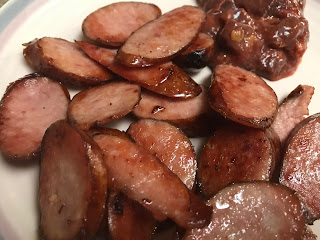 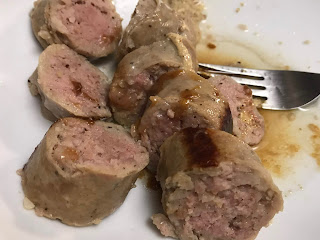 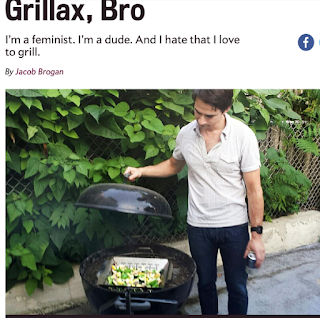 I hate how much I love to grill.  It's not that I'm inclined to vegetarianism or that I otherwise object to the practice itself.  But I'm uncomfortable with the pleasure I take in something so conventionally masculine.  Looming over the coals, tongs in hand, I feel estranged from myself, recast in the role of suburban dad.  At such moments, I get the sense that I've fallen into a societal trap, one that reaffirms gender roles I've spent years trying to undo.  The whole business feels retrograde, a relic of some earlier less inclusive era.


Did you catch those triggers? "Fallen into a societal trap" and "reaffirms gender roles"  "...retrograde, a relic...less inclusive era."

These days, there are those that are trying to polarize everything.  Turn one group onto another.

Women against men.  Young against old.  Traditional practices versus anything goes.  A blurring of the differences among the sexes, a belief that it is toxic to be masculine, or the many other labels being slung around these days by the alleged masters of tolerance.

There are those who seek to 'domesticate' and 'enslave' us all.  Refuse to be domesticated!

There are those who have a monopoly on journalism and media of all varieties.  They are craftily carving out narratives that they want the naive and unsuspecting masses to believe, and take in as gospel.  They are shaping our cultural beliefs and ideologies.

Be aware.  Question everything!

If you are a man, and you like to grill, excellent.  Enjoy! 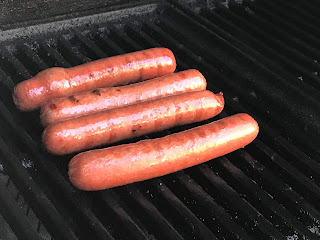 If you are a woman, and you like to grill, excellent!  Enjoy as well!


There are natural traits and genetic and biological predispositions to the feminine and masculine opposite but complementary expressions.  Each person has varying degrees of these traits, however, much is dictated by hormones, diet, chemicals and drugs, and the diet and chemicals consumed by our mothers.  Some is also shaped by environment, heavily influenced by cultural 'norms' expressed in the media and the schools ~ also essentially owned by a relatively small few.  (You may also like to read my article, Why I Don't Hate Men, and Disagree With Feminism ~ Yin Yang Principles of Balance)

While there are ways that women tend to operate that can confuse or confound the shit out of men, and there are ways that men may act that frustrate the heck out of women, I believe the answer comes from learning to better understand that we are each wired a bit differently.  We don't have to fully understand or like anything.  Neither do we need to keep dismissing (or favoring) one over the other, which is the definition of chauvinism.

One is not better than the other.  Both have an evolutionary and biologic function, designed when fully expressed and realized to the fullest potential to help us individually and within our families and extended communities to best thrive.

There is a positive and negative expression to everything.  When operating from a place of balance, we are exalted.  When operating from a place of imbalance, we suffer the consequences.  We experience symptoms that are themselves designed to hopefully get our attention, and do what is needed to restore balance.  Perhaps the 'negative' or challenging symptoms we are experiencing are meant to be uncomfortable, precisely to help us look within, and make some changes.  Take a leap of faith towards expressing our True Nature, rather than hold back out of fears, or unrelenting self doubts, insecurities, and faulty wiring.

Both men and women have the equal potential for the positive or negative expression of these various traits.

The imbalanced expression of being nurturing and receptive is pathological altruism.   Caring when it is detrimental, and giving all the time without also being able to ask for and receive help.

The imbalanced expression of being logical, or strong and protective is authoritarianism and aggression, bullying and abuse.

Women and men equally can express the greatness of who they are, or succumb to their darker, shadow aspects.  Both men and women can be caring and protective, and/or aggressive and abusive.

Continually pointing out in a whining and complaining tone that 'all' of an entire group are X, Y, Z, and that the very natural expression of who they are needs to change or be suppressed is absolutely inappropriate.  It just pits one sex against the other.  It is also a blatant disregard for one's own actions.  It's a refusal to look within, and be accountable to one's own actions, or one's own unhealed wounds.

I am not condoning bad behaviors.  No matter whom is the perpetrator.  I'm not discounting themes and patterns of the past, or past injustices.  I'm merely stating that I for one am tired of the complaining that is pitting the sexes against each other.

If we are to move forward,  improve relations, and create an atmosphere that is more conducive to all thriving, then we must begin with ourselves.  We must look within at our own shadow aspects.  We must begin to accept that we have hormones that dictate certain features, and that we have these roles for a reason.  Because they make sense.  They have worked for the entirety of life on Earth.  Animals are not quibbling over who brings home lunch, and who tends to the young cubs.

How about we all quit turning every single once enjoyable activity or even daily necessity (like just eating food) into such divisive battles?

Don't let the joy drain from the summer breeze!

In the video below, I show our pre July 4th shopping haul (spoiler alert, lots of grill items) and our brief discussion of the alleged manly role of grilling.

The Hypercarnivore Diet by Don Matesz