on May 09, 2020
National Institutes of Health lead investigator Kevin Hall and colleagues have just released the pre-publication report of a randomized controlled crossover trial comparing the results of following a plant-based low-fat (PBLF) diet or an animal-based low-carbohydrate (ABLC) diet.

I think this study does support the Meats & Sweets approach, particularly the inclusion of fruits at the expense of very high fat animal products. 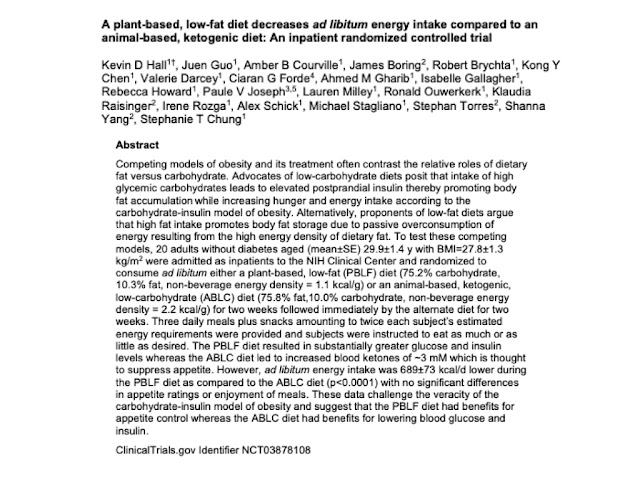 
The study was inpatient and had a crossover design.  None of the 20 subjects had metabolic disease.  Each subject was randomly assigned to one of the two diets for the first 2 weeks each diet 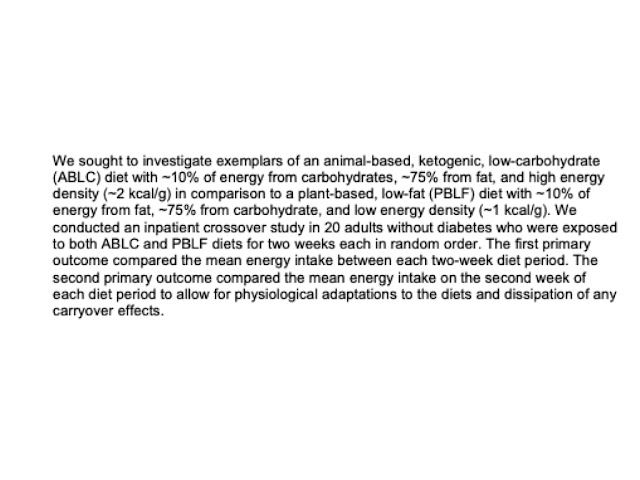 The two test diets were opposites in carbohydrate and fat content: 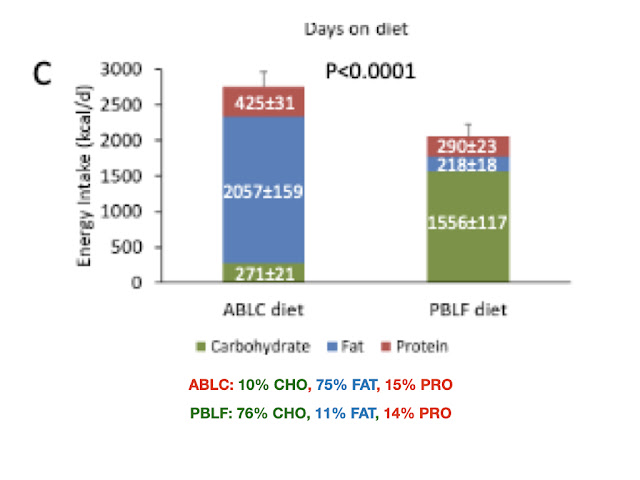 
The PBLF diet provided 50 g sugar per 1000 kcal. Almost all meals and all snacks included fresh and/or dried fruits.

The study report has photos of all meals served, some I have presented below.


The meals were composed primarily of whole foods and subjects ate as much as desired of what was offered.  Meal service provided more than 5000 kcal daily for each subject: 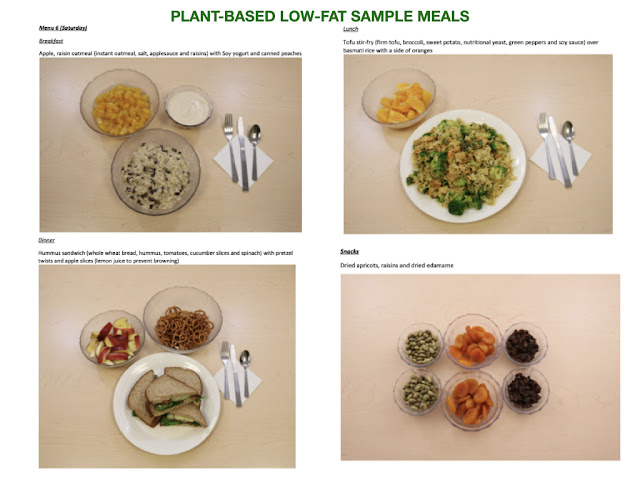 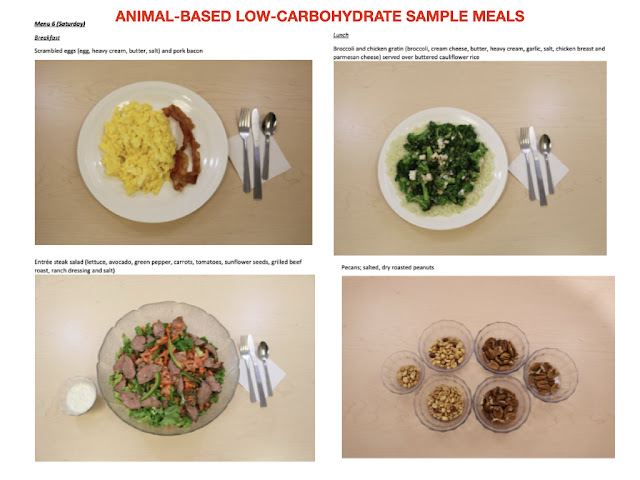 
The ABLC was significantly ketogenic: 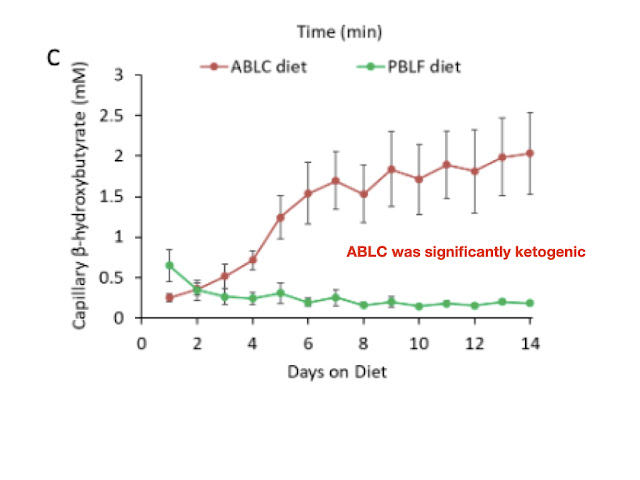 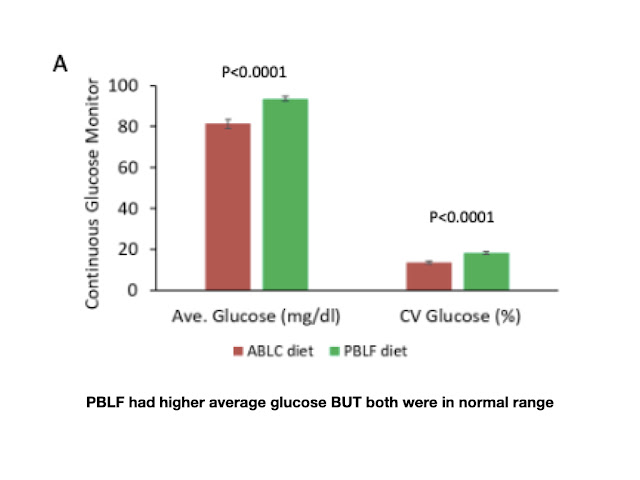 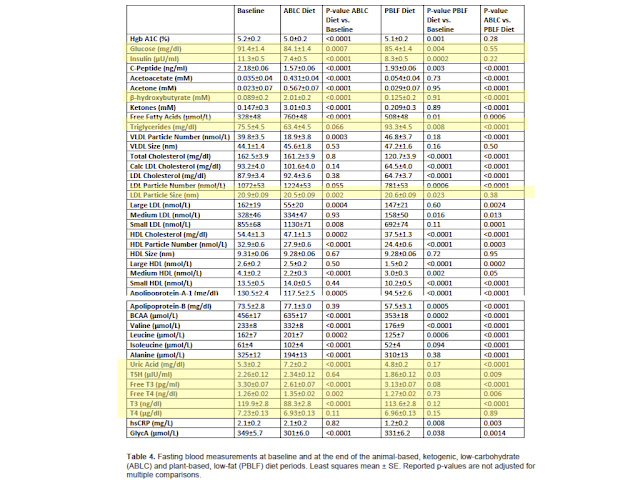 From this table also note the following:

Contrary to prediction of carbohydrate-insulin hypothesis, hunger, satisfaction, fullness and eating capacity were no different between the two diets.  In other words, eating carbohydrates, including sugars, did not make people more hungry than eating fat. 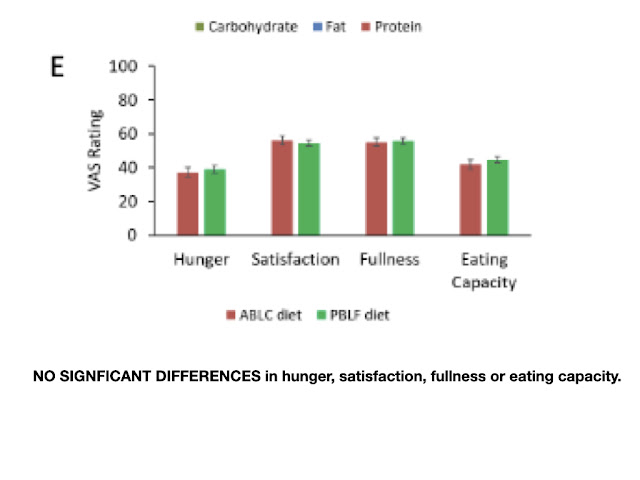 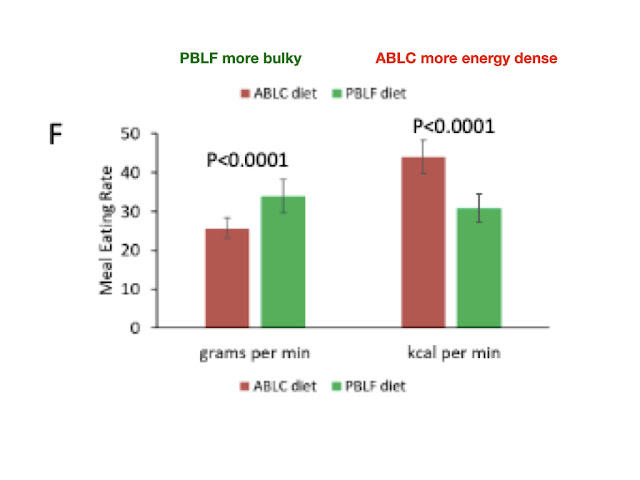 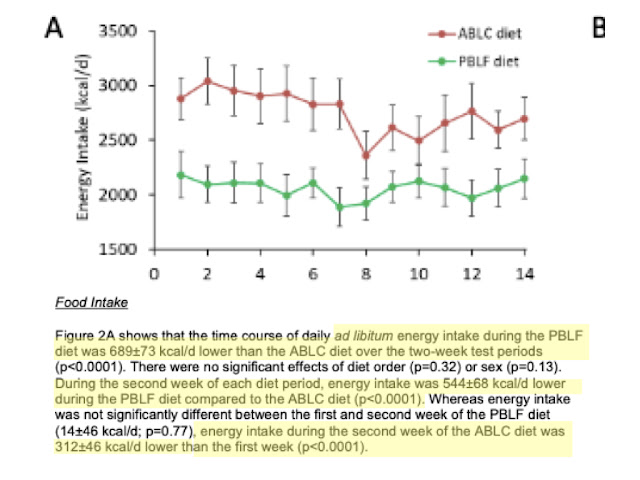 Since the subjects were only on each diet for only 2 weeks, notice that for both diets the energy intake appears to be stabilizing during the last 4 days. However this is speculation. Overall from day 8 to 14 the trend line for energy intake is slightly upward on both diets.  My experience is that people tend to lower total food intake during the first ~4-8 weeks of any new diet, then as the become accustomed (adapted) to the new diet, they learn how to eat more.  They learn how to make more dishes that they like and this increases total energy intake.

Twenty-four hour energy expenditure was about 166 kcal/day higher when subjects were on the ABLC diet than when they were on the PBLF diet. 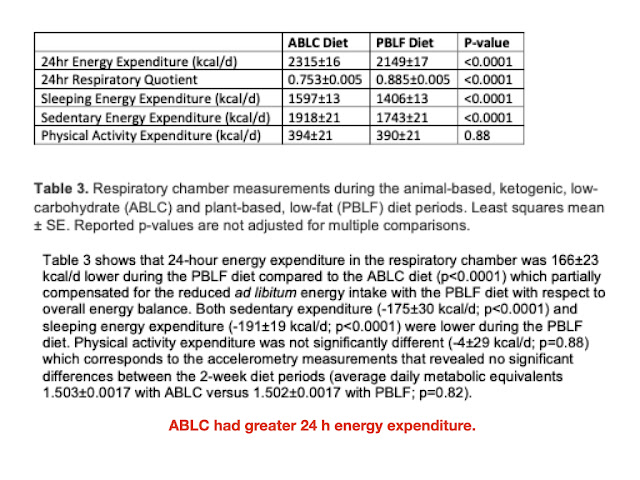 However, this slightly higher energy expenditure was not sufficient to improve fat balance compared to the PBLF diet. 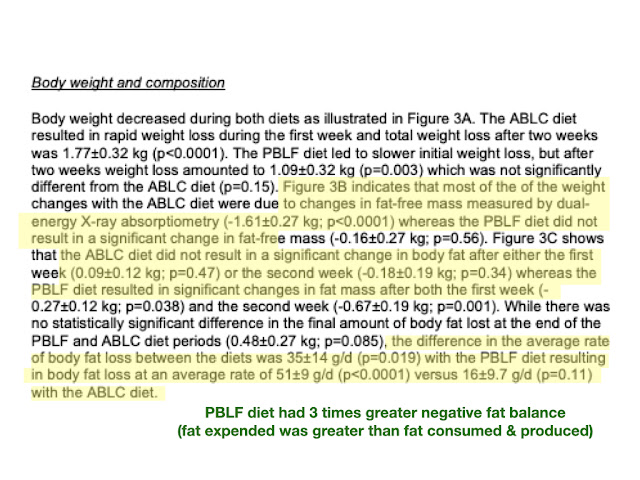 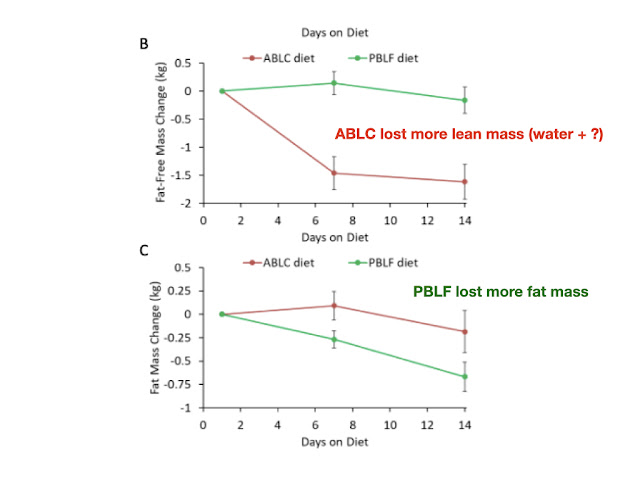 The subjects spontaneously lost more body fat when not in ketosis, than when producing substantial ketones.

This is predictable because the subjects had a significantly greater fat intake on the ABLC than on the PBLC. Every gram of fat you eat replaces a gram of body fat as an energy source.

If you oxidize (burn) more fat than you ingest and produce (via de novo lipogenesis), then you have a negative fat balance, and you lose body fat.

If you oxidize less fat than you ingest and produce, then you have a positive fat balance, and you gain body fat.

Simply put, the more fat you eat, the less body fat you will burn.  To lose body fat, you absolutely must eat less fat than you oxidize.

Regardless of whether your diet is plant- or animal- based, reducing fat is predictably more effective for fat loss than increasing fat.  It is just mathematics and economics.

You don't have to eat a plant-based diet to reduce your fat intake.  Simply eat animal foods that have a lower fat content, more like wild game than the high fat products produced by modern animal feeding methods.

The main limitations of this study are:

1) Limited duration: Each subject followed each diet for only 2 weeks.  This study can't support any conclusions about long-term effects of following either diet. Long term adaptation to either type of diet could result in either increased or decreased energy intake.
2) Inpatient design:  This study can't be generalized to free-living subjects making independent food choices.  As the authors state: "Due to the controlled food environment in our study, the only choice available to our subjects was how much of the presented foods and beverages to consume." 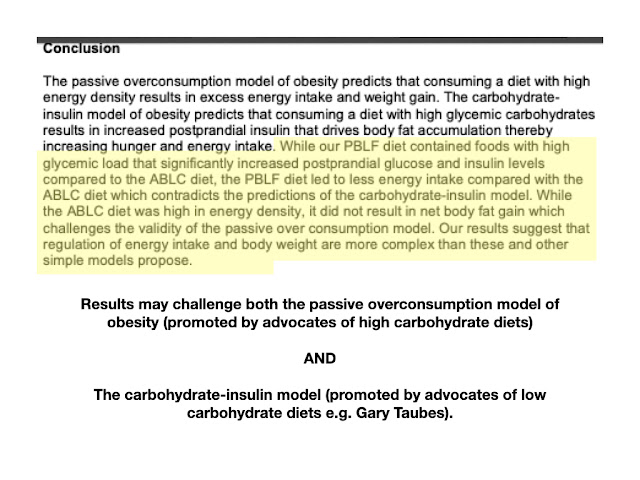 1) This study did not support the carbohydrate-insulin hypothesis.  Although the PBLF diet contained foods with a high glycemic load and significantly increased post-meal glucose and insulin levels compared to the ABLC diet, subjects consumed less energy and lost more body fat when eating the PBLF diet compared to the ABLC diet, opposite of prediction of the carbohydrate-insulin hypothesis.

2) This study did not support the passive over consumption model either.  Although the ABLC diet had a high energy density, it did not result in net body fat gain.

However, I disagree with the second conclusion of Hall and colleagues.  Since the ad libitum ABLC diet did not produce body fat loss whereas the ad libitum PBLF diet did, this tends to lend support to the passive overconsumption model.

Since subjects ate ad libitum on both diets, and reported no differences in hunger or satisfaction, this suggests that when we eat high fat foods, we have to eat more total energy (kcal) to achieve satisfaction of hunger, than if we eat high carbohydrate foods. In other words, as has been previously established, this study supports that whole foods rich in carbohydrate and low in fat are more satiating per kcal consumed than high fat animal foods.

In my view, this study provides more evidence that if you want to control body fatness, you should focus on controlling dietary fat content, not dietary sugar.  You should reduce butter, cream, other animal fats, including fatty meats, and especially eliminate plant-based oils, not fresh or dried fruits or honey.

This study also supports my hypothesis that we are by Nature designed to eat both natural sweets and lean meats.

By natural sweets here I mean low energy density whole sugar-rich  foods – primarily fruits (fresh, dried and juiced) and honey – to satisfy hunger and provide a large part of our energy requirements. In other words, meats and sweets.

As I presented in The Hypercarnivore Diet, we have multiple adaptations to a highly carnivorous diet including:


Lean meats provide essential protein/amino acids, fats and micronutrients in a non-toxic package. Presumably we are best adapted to lean meats having a low fat content similar to wild game.

However, we also have features of frugivores, including: