Traditional Hungarian Nut Rolls are a much beloved pastry for good reason.  It's delicious!  Like a slightly sweet nut bread, without being too 'bread-y' if you know what I mean.  Less dry flour.

Don decided to take up the banner this year in her absence.  The recipe she used was dug up while cleaning out his parent's condo, however, we could not recall what happened to it.  As a result, we did an online search for recipes, and found one here which looked very much like the recipe his mother used. Interestingly enough, we found it on a blog post written by a woman from the NE Ohio area who looked familiar to Don.  Perhaps she was from the same Hungarian neighborhood of Toledo?

We updated our Traditional Hungarian Nut Rolls, subbing 2 cups of sprouted wheat flour for half the 4 cups of all purpose flour.  The recipe makes three rolls.  We also subbed dates for the sugar in one of the three rolls.  The Date Walnut Roll is a great option for those who want to reduce the refined sugar in their diet, as the only sugar used in the entire recipe was one teaspoon in the pastry, divided among the three rolls!  Dates are also a great source of potassium!!! The filling of that roll was made entirely with dates and walnuts plus the stiff beaten egg whites and a little vanilla. 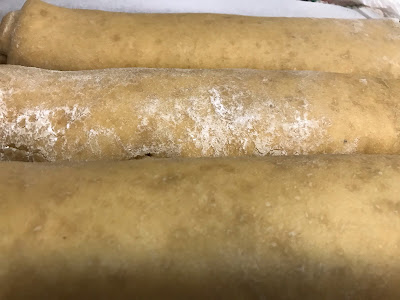 As an aside, I understand many are trying to improve their health by eliminating sugar or grains or greatly reducing carbs.  I've been there, so I understand.  I've had extended stretches of time where I eliminated all refined sugars, and even most plant foods.  However, sometimes a little sugar and more refined grain product is precisely what is needed!  I like healthier treats made with natural ingredients, but sometimes  a rich pastry is precisely the indulgence the doctor ordered!

Sugar, fat, flour, and all the other ingredients that tend to constitute most dessert treats create an alchemical balance that can be lost while subbing out alternative sweeteners, fats and whole grains ~ at least in some circumstances.  It's all a matter of balance.

As for our Updated Traditional Hungarian Nut Rolls with half sprouted wheat flour, you'd never know looking at them or tasting them that they are "healthier."  They taste less refined and commercial, more homemade with a smooth, well rounded flavor.   The sprouted flour is much lighter than whole wheat flour so it's still as light and delicate as the Traditional Hungarian Nut Roll recipes.

The date filling was stiffer, and harder to spread as thinly, hence the roll shape was less flat.  Both rolls in our opinion were excellent, especially given this was our first run of making Traditional (or updated Traditional) Hungarian Nut Rolls.  I do believe this may become our own ongoing tradition! 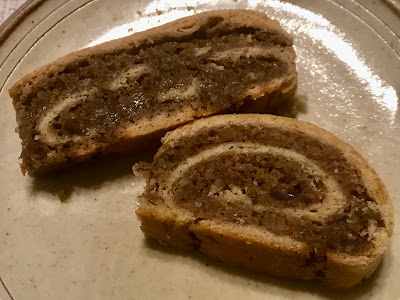 There are many variations of Traditional Hungarian Nut Roll recipes on the internet!  We chose the one that not only seemed most like Don's mother's recipe, but also was fairly simple.

The base recipe we used can be found at Julie Ann Brady: Blog On at https://jaguarjulie.blogspot.com/2014/09/nut-roll-traditional-hungarian-pastry.html

Follow her recipe, and add our updates if desired by subbing 2 of the 4 cups of flour for either sprouted whole wheat flour (found at health stores or you can purchase here), or a white whole wheat flour.  Spelt flour, or sprouted spelt flour is another option that I like to bake with because of the lighter texture produced in baked goods.  Whole wheat pastry flour could be another option.

We followed her recipe exactly for the nut filling, deciding as an afterthought to make some with dates, as one of the recipients we were gifting a Nut Roll to is avoiding sugar.  Plus we were curious how it would turn out.  So while Don made the pastry dough, I made a separate batch of filling blending dates with walnuts.   Since we only needed enough for one of the three rolls, I processed about 1/3 of a pound more walnuts with about 3/4 cup chopped dates in a food processor, then folded in the vanilla and stiffly beaten egg whites.

If using all dates, it would be one pound of walnuts and about 1-1/2 cups pitted dates.  I did add a few (very few) drops of liquid stevia to the date mixture.

If I'm able to reach Julie for permission to reprint her recipe, I'll update the post.  However, her recipe is very easy to follow.  And now you know how to update the Traditional Hungarian Nut Roll recipe to make it with part whole grain flour, and with minimal to no granulated sugar.

Since I had extra walnut + sugar filling, I turned them into Date Walnut Cookies.  I thought I bookmarked that recipe, but didn't.  I think the recipe was from a NY Times article.  In lieu of that one,  here's a good base recipe for Date Walnut Cookies using whole wheat flour.  I had to ad lib how I made mine since I had the extra walnuts, sugar and egg whites already blended together.  I creamed the butter with a tiny bit of brown sugar.

If I make Date Walnut Cookies again, I'll be sure to take better notes so I can put the entire recipe up next time! 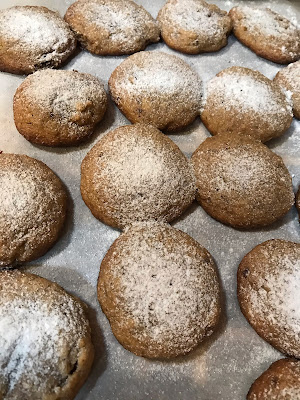 I've included the types of flour I either use or recommend, for quality and location of the grain grown.  King Arthur brand of flour can usually be found at most commercial grocery stores.  At one point I was able to purchase sprouted spelt flour at a local Fresh Market, but when I went back to buy more, it was gone, and appeared to be discontinued.  I used the One Degree sprouted spelt flour.

Pricing is better when buying larger sizes or in bulk!  (Purchases made through my links are greatly appreciated!)